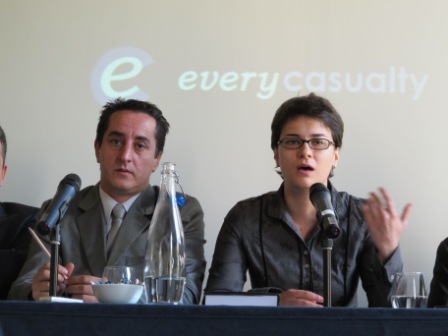 The Charter’s core demands (full text and signatories below) are few but far-reaching. These are that states ensure every casualty of armed violence is:

These calls on states are informed by the experience and insights of a newly-formed international network of NGOs who have been documenting the death toll in past or current armed conflicts and in regions suffering from extensive criminal violence. The Charter has also been endorsed prior to its public launch by a range of charities and NGOs who consider the open, comprehensive and respectful recording of fatalities – including of the forcibly disappeared – from armed violence to be a cross-cutting issue of relevance to their work and in alignment with their humanitarian principles.

Organised by Oxford Research Group, the launch event at the British Academy was chaired by its President, Sir Adam Roberts, and was attended by members of the casualty recording network, members of other signatory NGOs, government representatives, supporters and well-wishers. The Charter will be circulated after Thursday’s event to gather much wider support from the civil society and a broad spectrum of NGOs and other organisations, in order to help bring it more compellingly onto the agendas of states. An important element of the Charter’s potential to influence state actors is that its casualty-recording requirements are firmly grounded in international law  – which in effect makes them obligations (particularly – but not only – when states are parties to armed conflict).

Speaking at the British Academy launch, Hamit Dardagan, Co-Director of Oxford Research Group’s Every Casualty programme, which drafted the Charter and researched its legal basis, outlined some of its context and aims:

Armed violence continues to exact its human toll throughout the world, yet all too many of its victims die in obscurity, unnamed and unacknowledged, the pain and tragedy of their loss forever missing from the public record. No one understands the difficulties of recording such deaths better than some of the people gathered in this room, because we have been doing the work, and trying to overcome the difficulties. This is in stark contrast to many states, who instead of making every effort to fulfill this obligation have sought every excuse to avoid it, thereby giving themselves license to refer to the full extent of casualties as intrinsically unknowable and to treat the issue as essentially political.

It is highly fitting that this Charter is being publicly introduced at the British Academy, the UK’s centre for excellence in the humanities and social sciences, because the domain in which the casualties of armed violence occur is that of present reality, and historical fact. If the simple demands of this Charter are met, then we may finally see this issue more often discussed as a matter of truth – a truth referring to victims who had a name and identity, and a truth as unavoidable to all of us as it already is to the bereaved.

The ‘Kosovo Memory Book, 1998′, is a clear and powerful response to this shameful tradition of neglect.

Throughout history, millions of people have been killed and gone missing in armed conflicts. Their families and loved ones will forever remember them; however, to most people they are just statistical data and numbers. It is therefore our obligation, as members of the civil society, to register them, to record in depth their suffering and make it public, in the hope that past mistakes will not be repeated in the future.

The meeting also heard from Wissam Tarif, Executive Director of INSAN, an organisation publishing the results of detailed investigations into the ongoing deaths of Syrian protesters. The Syrian regime has made it very difficult for local and international monitors, including the UN, to document casualties. Tarif presented INSAN’s latest updated death toll, described their investigative methods in Syria, and pointed to good and bad practices, and the effect of the latter on public opinion and political decision-makers. Speaking at the launch, Wissam Tarif (Executive Director of INSAN and global campaigner for Avaaz) said:

Reconciliation and truth commissions have opened tombs and exhumed the bodies in an attempt to find the truth. This Charter should shorten the agony of not knowing, prevent the postponement of justice, and contribute to ending the denial of truth.

These are just two of the many projects working to bring public recognition for the ultimate price being paid by so many individuals, predominantly civilian, in armed violence around the world. The Charter is also intended to bring some overdue recognition to their work, which can only benefit from being better understood by states and the wider public.