Over 40 students of the Novi Sad University attended the “To Know and not to Repeat It” public event held on April 1, 2011 at the Faculty of Philosophy. The students were informed about the concept of One Million Signatures Campaign the goal of which is to collect one million signatures in support of the creation of a Regional Commission Tasked with Establishing the Facts about War Crimes and Other Serious Human Rights Violations Committed in the Period 1991-2001 on the Territory of the Former Yugoslavia (RECOM). 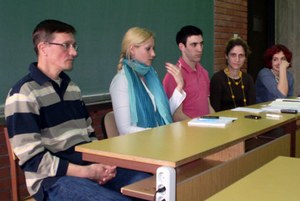 Dr. Zolt Lazar, professor at the Sociology Department, Aleksandra Jerkov, member of the League of Social-Democrats of Vojvodina and Member of Parliament of the Republic of Serbia, Maja Mićić, director of the Youth Initiative for Human Rights Serbia, and Jovana Kolarić, sociology student, member of the Coalition for RECOM shared their opinions on the idea of RECOM, the One Million Signatures Campaign, and the need for young people to take part in it.

Professor Lazar believes that an independent regional commission may instigate significant changes in the states formed following the dissolution of the former Yugoslavia. “Our goal should not be limited to creating a legal state; our goal should be to reach for a much higher ideal – the rule of law in newly formed states”, said professor Lazar who was the first to take the floor.

Aleksandra Jerkov spoke about the importance of political support for the success of RECOM. “This Initiative must be supported because it leads to reconciliation”, stressed Jerkov and added: “Truth is the most powerful instrument of support. Therefore, it is our duty to promote truth and to talk about it to those who will listen but also to those who may not want to hear us. Facts are the only way leading to truth and truth is the only way leading to reconciliation”.

Maja Mićić, director of the Youth Initiative for Human Rights elaborated the details concerning the beginning of the One Million Signatures Campaign and explained ways of including students in the campaign. She also announced the beginning of a volunteer training program which would be held at the Association of Independent Journalists of Vojvodina.

Jovana Kolarić, a sociology student, member of the Coalition for RECOM since its founding, told her fellow students that the true value of the Commission is making it possible for victims of war crimes to speak, tell the truth in their own words instead of being interrogated. “The greatest power of this Initiative lies in the fact that it stems from the society itself and therefore cannot be considered imposed”, said Kolarić.

The “To Know and not to Repeat It” event was organized by the Youth Initiative for Human Rights, Sociology Students Club “Sociologikus”, and the Vojvodina Civic Center from Novi Sad.

Focus Group: Trial of Ratko Mladić and Legacy of the Hague Tribunal for Former Yugoslavia