Six students from Priština visited the Humanitarian Law Center (HLC) in Belgrade where they were informed about the Initiative for the Creation of a Regional Commission Tasked with Establishing the Facts About War Crimes and Other Serious Human Rights Violations Committed on the Territory of the Former SFRY in the period from 1991-2001 (RECOM) and the “Kosovo Memory Book” project.

Director of the media campaign for the Initiative for RECOM Lazar Stojanović told the students that the use of societal networks such as Facebook had yielded considerable results in presenting the Initiative to a broad public and made the Initiative visible for a large number of people.

“We also intend to open a Twitter account in the final stage of the media campaign, after the launch of the “One Million Signatures for RECOM” campaign. The signatures will be submitted to the parliaments of the states in the region along with the Draft RECOM Statute for adoption and for the creation of the first such international commission”, said Stojanović.

Stojanović informed the students that the documents, reports, and information concerning the activities of the Coalition could be found at: www.zarekom.org. 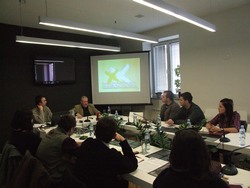 HLC Analyst Predrag Miletić presented the individualized register of all victims in Kosovo in the period 1998-2000 – the Kosovo Memory Book project. He explained that HLC researchers in Kosovo and in Serbia were busy collecting statements from witnesses, family members and other individuals who might have information about the suffering and the disappearance of victims, or who might possess other sorts of relevant documentation and photographs.

Miletić also told the students that a total of 5,898 recordings had been made so far, describing the destiny of 10,002 victims of suffering, kidnapping, and disappearances, which represented a total of 75,52% of the total number of victims registered in the data base (13,243), and that the list of the names of victims could be found at link:

Students from Priština visited Belgrade as part of the Visiting Program of the Youth Initiative for Human Rights which included over 7,000 young people in the last seven years. For most of them it was the first time they visited Belgrade and/or Priština. The goal of this exchange program is to bring down the “wall” between civil societies of Kosovo and Serbia and to enable young people experience the life in both cities so that they can have a better picture of the real situation and the changes taking place in Serbia and in Kosovo.