One Million Signatures for RECOM” Campaign Begins Throughout the Region 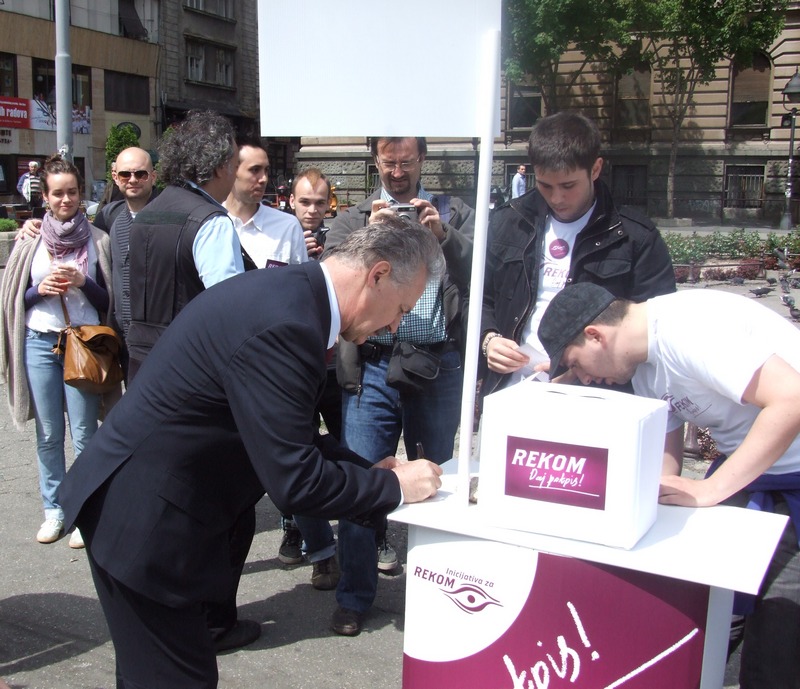 The “One Million Signatures for RECOM” campaign begins throughout the entire region of the former Yugoslavia on April 26, 2011. RECOM is an independent, international, regional commission tasked with establishing the facts about all victims of the wars waged in the period 1991-2011 on the territory of the former Yugoslavia as well as about all gross violations of human rights committed during or in connection with said wars. The Proposed RECOM Statute was adopted on March 26, 2011 at the Fourth Assembly of the Coalition for RECOM. The adoption of the Proposed RECOM Statute was preceded by a long and comprehensive public debate conducted throughout the region.

The collection of sign atures in all communities in the former Yugoslavia region is organized by the Youth Initiative for Human Rights which is being assisted by young members of a dozen non-governmental organizations. The campaign will be carried out by 2,000 volunteers chosen and trained by those organizations.

The ceremonial launching of the campaign was marked by a symbolic simultaneous collection of signatures  at 11:05 a.m. in Banja Luka, Belgrade, Ljubljana, Niš, Pančevo, Podgorica, Priština, Sarajevo, Skoplje, Tuzla, Vranje, and Zagreb. The campaign will also be conducted in other cities and towns in the region. Many celebrities in the above listed cities showed up among the first to give their signatures in support of the establishment of the regional commission. Media coverage was very extensive and most reports, comments, and thematic programs dedicated to the launching of the “One Million Signatures for RECOM” campaign were aired that same night.

The campaign will last until June 6, 2011 when the Coalition for RECOM will submit the signatures and the Proposed RECOM Statute to presidents, presidencies, governments, and parliamentary assemblies of all post-Yugoslav states along with a formal request to establish RECOM.