In various wars 2.385 citizens of Serbia and Montenegro were killed or disappeared. 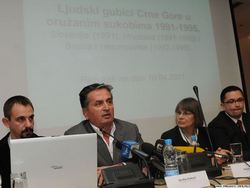 Twenty years since the beginning of the war in the former Yugoslavia not a single state in the region has compiled an individualized register of their killed and missing citizens. For Serbia and Montenegro it was done by a non-governmental organization from Belgrade, the Humanitarian Law Center. The results of the HLC research were presented in Podgorica and the event was attended by families of some of the killed and missing.

The Humanitarian Law Center published the results of a preliminary analysis which showed that 2.385 citizens of Serbia and Montenegro were killed or disappeared during the armed conflicts in Slovenia, Croatia, and Bosnia and Herzegovina – 2.083 from Serbia and 302 from Montenegro. The destiny of 494 missing persons is unknown and their families are still searching for their remains. Among the missing are 62 citizens of Montenegro.

“Our data show that during the wars waged in the period 1991-1995 over 300 citizens of Montenegro were killed or disappeared and it is necessary to create an individualized register of those losses to prevent future manipulations with the number of victims. Everybody realized that we have to stop this Balkan practice of using numbers without knowing the names of those who were killed or disappeared”, said Kandić.

According to Kandić, when it comes to a total number of the killed in the armed conflicts waged throughout the territory of the former Yugoslavia, the results of the research so far showed that the number is not as high as originally believed. She also said she was very sorry that the representatives of the Ministry of Defence of the Republic of Montenegro were not present because that Ministry had drafted individuals during the war.