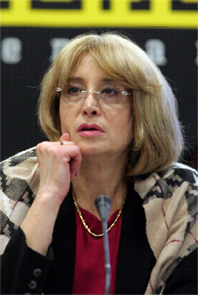 Biljana Kovačević-Vučo, president of Lawyer’s Committee for Human Rights – YUCOM, passed away this morning in Belgrade.

Date and the place of commemoration and funeral will be later announced.

Kovačević-Vučo was well-known human rights defender and one of the founders of the Yugoslav Action NGO and the independent union Nezavisnost in March 1999.

She was also a member of the Working Group for the Future of former Yugoslavia (established at a conference in Bratislava in July 1999. which was organized by EastWest Institute from New York).

During her long career as a peace movement and human rights activist, Kovačević-Vučo was the founder of the Human Rights Council of Center for Antiwar Action in Belgrade and head of the SOS helpline for the victims of political, ethnic and workplace discrimination.

She also founded and was secretary general of the Helsinki Committee for Human Rights Office for Legal Help in Belgrade from 1994 until 1997, president of the Democracy Transition Center executive board in 1997, and founder and president of YUCOM since 1997.

During her career as a lawyer she worked at the Commercial Court in Belgrade from 1978 until 1988 and as a senior associate at the Serbian Supreme Court’s criminal and civil departments from 1988 until 1996.

Kovačević-Vučo represented journalist Željko Bodrožić in the only case which Serbia lost before the UN Human Rights Council. Kovačević-Vučo was a member of the YUCOM expert and lawyers team which won two cases before European Court of Human Rights.