Kosovo Institutions Applying the Law on the Use of Languages

In the period from July to October 2007, the Humanitarian Law Center – Kosovo (HLC – Kosovo) researched and analyzed the extent to which local Kosovo institutions, Kosovo Assembly, District and Municipal Court in Prishtinë/Priština, Kosovo Property Agency, and Health Care Centre IV apply the Law on the Use of Languages. HLC-Kosovo conducted research in the following multiethnic municipalities: (Prizren/Prizren, Fushë Kosovë/Kosovo Polje, Klinë/Klina, Gjilan/Gnjilane, Peja/Peć, and Dragaš/Dragash). It was also conducted in the municipalities with a predominantly Albanian population (Skenderaj/Srbica, Deçan/Dečane, Gllogovc/Glogovac, Malishevë/Mališevo, Podujevë/Podujevo/), and in the municipalities with predominantly Serb population (Štrpce/Shtërpcë, Leposavić/Leposaviq, Zubin Potok/Zubin Potok, and Zvečan/Zveçan). HLC-Kosovo treated Prishtinë/Priština and Mitrovicë/Mitrovica as special cases.

END_OF_DOCUMENT_TOKEN_TO_BE_REPLACED

Ethnic Minorities in Kosovo in 2005

This report is based on more than 60 interviews with the members of minority ethnic communities in relation to the following issues: freedom of movement, return of displaced persons, access to public services, education, upbringing, and employment, use of mother tongue, and house reconstruction; as well as on interviews with victims of ethnically motivated incidents, and information available on individuals punished for the ethnic violence that erupted on 17 March 2004.

END_OF_DOCUMENT_TOKEN_TO_BE_REPLACED

Fate of the Missing Albanians in Kosovo

The report was composed on the basis of the statements given by witnesses and family members of the missing persons, data and observations of the Humanitarian Law Center (HLC) Monitors who regularly followed the exhumation and autopsies of the bodies found in the mass graves in Serbia, as well as data on bodies that were identified and handed over, received from the families or Belgrade War Crimes Chamber Investigative Judge who signs the Record on Identified Mortal Remains Hand Over.

END_OF_DOCUMENT_TOKEN_TO_BE_REPLACED

List of Items Discovered in Mass Graves in Serbia

During the course of 2003, Humanitarian Law Center (HLC) investigators visited all the settlements in Kosovo inhabited by persons belonging to ethnic minorities and interviewed 497 Serbs, Montenegrins, Roma, Bosniaks, Turks, Gorani, Egyptians, Ashkali, and Albanians. They paid special attention to the returnees. The investigators discussed with the interviewees the matters of security, freedom of movement, access to administrative and judicial authorities, access to health and social welfare services, employment, education, access to property, participation in political life, and return. The data they gathered indicate some improvement in 2003 regarding the freedom of movement and the return of refugees. This is a major step forward compared with the preceding period when Serbs in particular ran the risk of losing their lives outside their settlements. END_OF_DOCUMENT_TOKEN_TO_BE_REPLACED 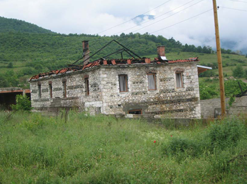 SFollowing June 1999 the Serbs in Kosovo have been having a hard time. After the withdrawal of the Serbian army and the police they became the targets for the KLA and criminal groups. Numerous murders, abductions and property destruction happened in the presence of the international forces. The absence of KFOR’s reaction persuaded even those Albanians who were against violence that the international community was supporting the idea of the extreme political groups that Kosovo should be free of the Serbs. On 17 March, with the exception of Mitrovicë/Mitrovica, UNMIK and KFOR, once again and primarily through their omission to act, encouraged the Albanian extremists.