The Humanitarian Law Center announces the “Ljubiša Diković” File. The document contains facts relating to the actions of the former Commander of the 37th Motorized Brigade during the war, as well as ICTY exhibits pertaining to war crimes committed in the area of responsibility of the war commander Ljubiša Diković.

END_OF_DOCUMENT_TOKEN_TO_BE_REPLACED 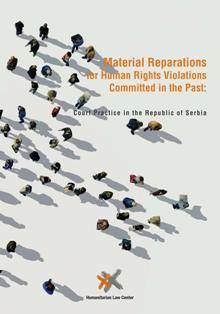 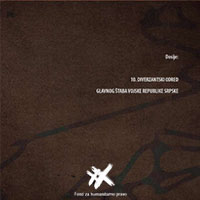 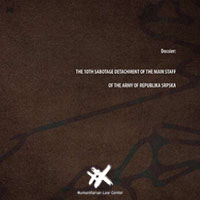 The 10th Sabotage Detachment, unit of the Main Staff of the Army of Republika Srpska (VRS) participated in the commission of genocide in Srebrenica in July 1995. It has been established that members of this detachment took part in two mass executions of Muslims from Srebrenica.

The second mass execution was conducted on 23 July 1995 in the village of Bišina, when members of the 10th Sabotage Detachment, following orders issued previously by Petar Salapura and Milorad Pelemiš, killed at least 39 Muslim prisoners. The identity of the soldiers who conducted this execution remains unknown.

Dossier “The 10th Sabotage Detachment of the Main Staff of the Army of Republika Srpska” can be downloaded here.

Digital narrative based on the dossier can be seen here.

Reports on war crimes trials in the Republic of Serbia 2010

In this document you can find: 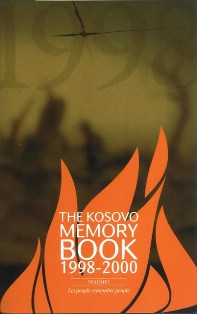 The Kosovo Memory Book is a symbolic memorial for all of the victims of the conflict in Kosovo in the period 1998-2000 and it represents an intention to preserve memory of them. As a result of years of research, information gathering, and data analysis, the Kosovo Memory book gives a name to every victim and establishes facts about the circumstances under which these individuals lost their lives or disappeared during the conflict. The Book is dedicated to victims from all ethnic communities in Kosovo and besides civilians, it also mentions soldiers from both sides who were killed in the conflict. This volume is only the first in a series and it speaks of the victims from 1998. Later books will cover the years of 1999 and 2000. END_OF_DOCUMENT_TOKEN_TO_BE_REPLACED 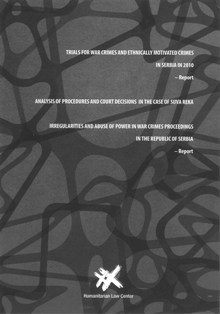 In its first part, the report discusses war crimes trials conducted before courts in Serbia starting with a short presentation of general characteristics of these proceedings. This is followed by the overview of the trials in which the Humanitarian Law Center represented victims and it contains the analysis of the proceedings in each individual case. The following part of the report contains an overview of the trials in which the HLC monitored the main hearing. There is a special text in the report, which contains an analysis of the proceedings and court decisions in Case Suva Reka. The last part of the report deals with the irregularities in the prosecution of war crimes in Serbia, i.e. with problems of the witnesses and the threats to their personal security in the case of members of the 37th Special Police Units Detachment, who have been indicted for war crimes committed in Kosovo during 1998 and 1999.