END_OF_DOCUMENT_TOKEN_TO_BE_REPLACED

The Humanitarian Law Center (HLC) and the Humanitarian Law Center Kosovo published in 2014 the list of individuals who died as a consequence of NATO bombing of the Former Republic of Yugoslavia. According to this list, the NATO attacks killed a total of 754 people: 454 civilians and 300 members of the armed forces. 207 civilians were of Serbian and Montenegrin ethnicity, 219 were Albanian, 14 civilians were Roma, and 14 were of other nationalities. From among members of armed forces, a total of 274 members of the VJ/MUP of Serbia and 26 members of the KLA were killed. END_OF_DOCUMENT_TOKEN_TO_BE_REPLACED

END_OF_DOCUMENT_TOKEN_TO_BE_REPLACED

On March 2 2018, the Humanitarian Law Center (HLC) submitted a criminal complaint against Svetozar Andrić, former commander of the Birač Brigade of the Republika Srpska Army (VRS), and later Chief of Staff of the VRS Drina Corps, to the War Crimes Prosecutor’s Office of the Republic of Serbia. The criminal complaint was filed for several crimes committed during the conflict in Bosnia and Herzegovina (BiH).

On May 28, 1992, Svetozar Andrić ordered the “eviction” of the Bosniak population from Zvornik, as the then commander of the VRS Birač Brigade, in whose area of responsibility were the municipalities of Vlasenica and Zvornik, among others. This resulted in the departure of more than 10,000 Bosniaks to Mali Zvornik, Kalesija, and the villages of Snagovo and Kula Grad. END_OF_DOCUMENT_TOKEN_TO_BE_REPLACED

Crime in Štrpci – 25 years without justice for victims

On Tuesday, February 27 2018, it will be 25 years since the crime in Štrpci, when members of the Republika Srpska Army (VRS), at the railway station in Štrpci (BiH), abducted 20 passengers from a train operating on the Belgrade-Bar route, and then killed them. They were all non-Serb civilians. The Humanitarian Law Center (HLC), Women in Black, the Sandžak Committee for the Protection of Human Rights and Freedoms, and the Youth Initiative for Human Rights, would like to remind the public that the families of the victims have been waiting for 25 years for judicial justice in Serbia and for recognition of the status of families of civilian victims of war. END_OF_DOCUMENT_TOKEN_TO_BE_REPLACED

On February 18 2018, 25 years have passed since the Yugoslav Army (VJ)’s attack on the Sandžak village of Kukurovići. In this attack, almost the entire village was demolished, and three citizens of Bosniak nationality were killed. The Humanitarian Law Center (HLC) and the Sandžak Committee for the Protection of Human Rights and Freedoms (Sandžak Committee) would like to draw attention to the fact that even 25 years after this crime against civilians – citizens of Serbia, nobody has been found responsible, and the state of Serbia has not provided the victims with adequate recognition and reparations. END_OF_DOCUMENT_TOKEN_TO_BE_REPLACED

On behalf of the Coalition for RECOM: The Establishment of RECOM is an Indicator of the Political Maturity of the Leaders of Post-Yugoslav Countries

On January 27, 2018, in Sarajevo, the Coalition for RECOM held the VIII Assembly Session, and afterwards, on January 28 and 29, 2018, the Eleventh Forum for Transitional Justice in post-Yugoslav Countries.

The Assembly Delegates welcomed the willingness of most leaders of the post-Yugoslav countries to sign the Agreement on the Establishment of RECOM within the framework of the Berlin Process, at the upcoming London Summit in July 2018, thus activating Article 49 of the Draft Statute of RECOM on undertaking preparations for the establishment of the Commission (RECOM). END_OF_DOCUMENT_TOKEN_TO_BE_REPLACED

Criminal complaint for rape of Roma women in 1993

On January 29, 2018, the Humanitarian Law Center (HLC) filed a criminal complaint with the Office of the War Crimes Prosecutor (OWCP) against several unidentified members of the Secretariat of the Interior (SUP) of Beli Manastir, for the rape of six Roma women (including one pregnant woman and three minors) in the basement of the SUP Beli Manastir, in the summer of 1993. END_OF_DOCUMENT_TOKEN_TO_BE_REPLACED

After 14 years, the first war crimes case before specialized court councils in Serbia came to a close with the new final judgment for the crime at Ovčara near Vukovar. The Humanitarian Law Center (HLC) points out that the trial in this case is one of the best indicators of the ineptitude of Serbian institutions in dealing with the obligation to approach the crimes from the past with responsibility and dedication. END_OF_DOCUMENT_TOKEN_TO_BE_REPLACED 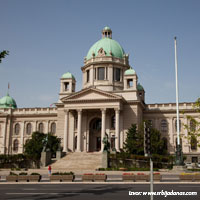 Speaking on N1 TV station in January 2018, Milovan Drecun, the President of the Serbian Parliamentary Committee for Kosovo and Metohija, referred to the Bytyqi brothers, killed by the Serbian police in July 1999, as „terrorists“. The Humanitarian Law Center (HLC) considers such a description of these victims, whose family has been waiting for justice for more than 18 years, unacceptable, especially bearing in mind that it comes from a person highly placeed within the power structures of the Republic of Serbia.