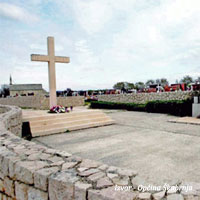 On Sunday, November 18, 2018, we mark exactly 27 years since the commission of the crimes by members of the Yugoslav People’s Army (JNA) and Territorial Defence (TO) of Benkovac against Croatian civilians in the villages of Škabrnja and Nadin. Although the Humanitarian Law Center (HLC) filed criminal charges for these crimes with the Office of the War Crimes Prosecutor (OWCP) in November 2017, to date the HLC has no information as to whether the OWCP has taken any legal action that would lead to the trial of those responsible for this crime.

Early in the morning on November 18, 1991, the JNA, together with the Benkovac TO, entered the village of Škabrnja from the nearby village of Smilčić, which was predominantly inhabited by Serbs. After entering the village, they destroyed the Church of the Blessed Virgin Mary. After that, 41 Croat civilians were killed in various locations in Škabrnja. The next day, in the nearby Nadin, seven more civilians were killed. Most of the locals killed were elderly people, including 16 women, one of whom was a person with disabilities.

Before the courts in Serbia, however, not one JNA or TO member has been found responsible for these crimes.

Before the International Criminal Tribunal for the former Yugoslavia for the crimes committed in the villages of Škabrnja and Nadin, Milan Martić, the then Minister of Internal Affairs of the Serbian Autonomous District (SAO) Krajina and Milan Babić, the then President of SAO Krajina, were sentenced to several years of imprisonment.

On November 21, 2017, the HLC filed criminal charges against six identified and several unidentified JNA and TO members, for the murder of 48 Croatian civilians in villages of Škabrnja and Nadin in November 1991. So far, the HLC has sent two urgencies to the OWCP for proceeding with these criminal charges, in which the HLC has requested the OWCP to report on the legal acts it has undertaken to investigate the allegations in the application filed. The OWCP has not responded to either of these urgencies.

For this reason, the HLC demands that the OWCP conduct an efficient and effective investigation of all allegations to do with these criminal charges, in order to end the practice of impunity, and at the same time to enable the families of the victims to obtain the justice they have been awaiting for 27 years.