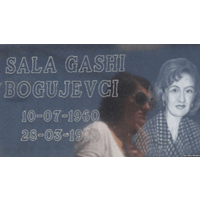 Survivors of one of the worst massacres of the Balkans war say they are shocked and devastated after discovering that one of the men that took part in the killing of 16-members of their extended family, has been paroled from prison after serving just 16 -years.

Sasa Cvjetan, 43, was one of five members of Serbia’s notorious Scorpions Paramilitary Unit that carried out the massacre in the Kosovan town of Podujevo on the 28th March 1999. Four years earlier in July 1995, the Scorpions had also carried out the largest mass killing since the Holocaust- the murder of 8000 Bosnian Muslim men and boys at Srebenica.

On 24th March 1999, NATO began bombing Serbia and Kosovo in an attempt to stop the ethnic cleansing of Kosovo ordered by Serbia’s President Slobodan Milosevic. Milosevic responded by mobilising more Serbian forces and on 28th March 1999, the Scorpions were deployed from their garrison in Nova Sad to Kosovo. They arrived in the border town of Podujeva in the early morning. Soon after Cvjetan and four accomplices began house-to-house searches and found 21 petrified ethnic-Albanian women and young children and two elderly men hiding in a house. They shot dead the elderly men Hamdi Duriqi and Selman Gashi in the street. Cvjetan and his gang then marched the defenceless civilians to a nearby garden and lined them up against a wall. Despite pleas for mercy from the mothers of the children, Cvjetan and his four cronies opened fire with their AK47 automatic rifles. The hail of bullets lasted for 30-seconds before the killers reloaded and fired again for another 30 seconds. In that minute, 14 women and children died including an 18-month baby.

But miraculously five children clung to life. Saranda Bogujevci, 13, and her four cousins, Genc 6, Liria 8, Jehona 11 and Fatos 12, sustained a total of 32 bullet wounds between them. After the cowards had left the garden Saranda opened her eyes and tried to raise her petite body. She felt a bone break in her arm and warm blood trickling from the numerous bullet wounds soaked her body. Saranda would later learn that she had been shot 16-times. But her indescribable pain was nothing compared to the soul destroying grief that was about to overcome her as she observed the carnage all around her. At her feet lay the bodie of her beloved brother Shpetim 10. He had been decapitated by the bullets. Her mother Sala, 39, was also dead a few feet away with her other brother Shpend 12. Her cousin Nora 14, and grandmother Shehide, 67 were also killed.

The five survivors were found by local Serbian police officers and an army doctor who rushed them by ambulance to the main hospital in Prishtina. They were begrudgingly treated by Serbian Army doctors and managed to survive until NATO forces liberated Kosovo 12-weeks later on 12th June 1999. They were then airlifted to Manchester in Britain where they spent the next few years being treated in hospital for their physical and psychological trauma.

Nineteen-years on and Saranda’s recovery has been astonishing. She returned to Kosovo and today she is an MP. She says Cvjetan should have never been released because he’s a serial killer.

“Sasa Cvjetan murdered 16 people including my two young brothers Shpetim and Shendi, my mother Sala, and grandmother Shehide. I also lost my cousin who was like a sister to me Nora. We believe he was also a killer at Srebenica and Serbian police told us that he was also an assassin for the Serbian mafia. He is a monster. Killing is in his DNA. As a serial killer his neighbours in his hometown should be worried. Once a killer always a killer. He has served just 16-years of a 20-year sentence. Whereas we are serving a life sentence of grief. There’s no justice in Serbia”.

Saranda’s cousins lost their oldest sister Nora who was 14 and both families lost their common grandmother Shehide. In July 2003, the five survivors travelled from their home in Manchester to Belgrade to become the first children in United Nations’ history to testify at a war crimes trial. They came face-to-face with Sasa Cvjetan when they identified him from a prison line up as one of the killers from the garden in Podujeva. After giving eye witness evidence against him, Sasa Cvetan was sentenced to 20-years in prison in 2005. Each of Saranda’s cousins were shot at least three times each. Jehona Bogujevci, 29, who is now a graphics designer and living in Manchester says Cvjetan’s punishment is totally inadequate.

“Cvjetan killed 16-people in the garden. He killed my mother Shefkate, my sister Nora, my grandmother Shehide, even an 18-month-old baby named Albion Duriqi. For that he has served just 16-years. That’s just over a year for each killing. Cvjetan is a psychopath. Nobody is safe, not even Serbs, while Sasa Cvjetan walks the streets.”

In 2006, Serbia’s war crimes court jailed four Scorpion paramilitaries who were filmed themselves as they shot dead six captured young Bosnian Muslim men at Srebenica. The Scorpions Commander, Slobodan Medic, was sentenced to 20-years in prison for the Srebenica massacre of 8000 men and boys. He was also the commander of the Scorpions when they carried out the Podujeva massacre. But in 2013, incredibly, he was killed in a car collision with his wife and 17-year old son. The Bogujevci family want to know why Slobodan Medic was out of prison.

Fatos Bogujevci says: “None of the killers of Srebenica or Podujeva are serving their full sentences. There is no justice from Serbia.”

In December 2008, the Bogujevci children returned to Belgrade to testify at a second war crimes trial. Cvjetan’s accomplices were the defendants and in 2010 were found guilty of the Podujeva massacre: Zeljko Djukic, Dragan Medic and Dragan Borojevic were sentenced to 20-years in prison while Midrag Solaja was sentenced to 15 years in prison as the court determined he was under-18 when he committed the crime.

Saranda’s father Safet Bogujevci and her uncle Selatin Bogujevic (husband of Shefkate and father of Jehona, Fatos, Liria, Genc, and Nora who was killed) had fled Podujevo along with the other townsmen fearing they would be the ones targeted by the Scorpions. They assumed their wives and children would not be harmed but tragically they were wrong. The two brothers went to hide in the hills with their relative Enver Duriqi. The decision to leave that fateful day is one they will regret for the rest of their lives. But none more so than Enver. His entire family of seven was murdered in the garden. His parents Esma (1930) and Hamdi (1928), his wife Fitnete (1963) and four children, daughter – Dafina (1990) son – Arber (1992) daughter – Mimoza (1995) and son – Albion (1997) were all killed by Cvjetan and his accomplices.

Enver Duruqi says: “ Cvjetan and his cronies are animals. How can you kill a baby and young children. He doesn’t deserve to live let alone be released from prison.”

Here is a list of the victims from the three families. We have also attached photographs of each victim.