Invitation to Attend Presentation of Report „Judging with impunity: The role of prosecutors and judges in show trials of Kosovo Albanians in the period 1998-2000 “ 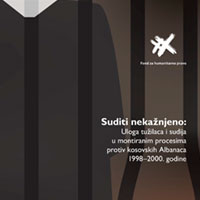 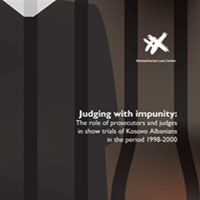 The Humanitarian Law Center will present the Report titled „ Judging with impunity: The role of prosecutors and judges in show trials of Kosovo Albanians in the period 1998-2000“, on Tuesday, July 25th, 2017. The presentation will take place in the Great Hall of the Media Center in Belgrade (Terazije nr. 3, II floor) at 11:00.

In late 1996 and early 1997, public prosecution offices on the territory of Kosovo began filing a great number of indictments against Kosovo Albanians for the criminal offences of Terrorism and Association for the purpose of hostile activity. The accused were charged, among other things, with  allegations that they had participated in the setting up of terrorist groups or gangs; that they engaged in armed attacks against members of the Police/Yugoslav Army/state institutions/Serbian and Montenegrin citizens in Kosovo, and that they had engaged in acts of violence in order to create conditions conducive to a violent secession of Kosovo and Metohija from the Republic of Serbia and the FRY.

After the Serbian forces retreated from Kosovo in early June 1999, all of the accused who were detained in prisons in Kosovo at that moment were transferred to prisons in Serbia. Their trials then continued before district courts in Serbia. The trials were completed with the passing of two Amnesty Laws (in 2001 and 2002).

The Report points to a number of violations of fundamental human rights committed during these criminal proceedings, as well as to the manner in which prosecutors and judges acted, the neglect of a number of allegations made by the accused that they had been subjected to torture and inhumane treatment in order to have admissions extorted from them in the preliminary criminal proceedings, the deprivation of the right to an adequate defence, the failure to ensure the presentation and assessment evidence in accordance with the law, and a number of other violations which may be categorized as gross violations of the right to a fair trial, guaranteed by the applicable domestic and international legal regulations.

Simultaneous interpretation into English  will be provided.