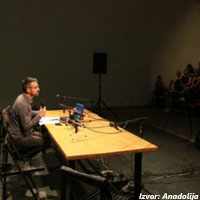 A public lecture on the court-established facts about the genocide in Srebrenica, held on July 11th in Belgrade, marked the end of the 8th Transitional Justice School of the Humanitarian Law Center (HLC).

This year’s School of Transitional Justice was held with the support of the Heinrich Boll Foundation in Belgrade. It was attended by students of law, political science, economics, history, and security, and activists from human rights organizations, youth workers, lawyer and court interns. Over the past few weeks they have gained knowledge about the disintegration of Yugoslavia and the armed conflicts that followed, the efforts of institutions and non-governmental organizations to provide the victims and societies with recognition and access to justice and truth, the contribution of the Hague Tribunal and domestic judicial processes, and the court-established facts about Operation „Storm“ (Oluja), the siege of Vukovar, and crimes in Kosovo. On these topics, they entered into discussions with historians Radina Vučetić and Marijana Toma, with Ivan Jovanović, an expert on international law, with a professor at the Law School of Union University, Saša Gajin, as well as with the HLC’s researchers.

This year’s School was dedicated to the memory of the victims of Srebrenica genocide. By spreading the knowledge of the court-established facts among the young citizens of Serbia, the HLC wanted to contribute to the recognition of both our responsibility and the victims’ suffering. Therefore, a lecture on the events in and around Srebrenica in July 1995 was held precisely on the day that marks the anniversary of the genocide in Srebrenica. On this July 11th, the participants learned what the ICTY established about the events that happened during and after the fall of Srebrenica in July 1995, and how Operation Srebrenica progressed; they also learned about the survivors’ testimonies concerning the events in Srebrenica, where and when the mass graves with the bodies of the victims were found, and why two international courts concluded that genocide occurred in Srebrenica.

Also, the participants contributed to the memory of victims with their work, in which they reflected on their testimonies, and in which they showed whether and how the victims are now visible to us, and how we areapproaching the obligation to punish all those who were involved in their plight.

According to the participants in the School, research and establishing the truth about war crimes is important primarily for the sake of the victims, both those who perished and those who survived, who have been waiting for recognition and justice all these years. This truth also prevents us from continuing to coexist with those responsible for the gravest human rights violations during the wars in the former Yugoslavia. The participants particularly liked the processing of case studies, and they also recommended visits to places of suffering. They feel that non-formal education on the mechanisms of dealing with the past and the court-established facts about the crimes committed is necessary and important; however, for dealing with the truth authentically, it is necessary that the lessons of the past become an integral part of the formal education programme.

The participants in this year’s School finished the programme inspired with the wish to contribute to the spreading of the facts about the past, and also to apply the knowledge acquired in their further engagement in the field of dealing with the past.

School of Transitional Justice is a programme of non-formal education about the court-established facts concerning the war crimes committed during the armed conflicts in the former Yugoslavia, the victims’ search for truth, support and recognition, and the securing of a guarantee of non-repetition of such conflicts by removing the individuals responsible for the crimes committed from state and government institutions.

Security Issues, Employment and Application of Law on the Use of Languages and the Anti-discrimination Law in Kosovo