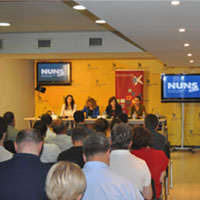 The Humanitarian Law Center (HLC) presented its triennial report “Transitional Justice in Serbia in the Period from 2013 to 2015” on Wednesday, June 22nd, 2016. The aim of the Report is to inform the domestic and international public about the progress made in the implementation of transitional justice in this post-conflict society, by offering an analysis of the achievements and problems in the functioning of transitional justice mechanisms noted in Serbia in the period 2013-2015.

According to the Deputy Head of Mission of the Swiss Embassy to Serbia, Ms. Pauline Menthonnex Gacaferri, Switzerland has never been more certain about the importance of establishing transitional justice in Serbia; but she also emphasized that the political environment should set about encouraging the implementation of strategic policies which would further the process of ending impunity for war crimes, and address the responsibility of institutions for the crimes committed in the past. In her opinion, the pace of war crimes prosecution in Serbia is very slow, and accompanied by impunity of high-ranking perpetrators and an inefficient witness protection system; the victims are not able to realize their right to reparation, and the search for missing persons is slow. Ms. Menthonnex Gacaferri particularly highlighted the fact that investigation of possible mass grave sites in Serbia and exhumations are mainly carried out with international financial support. She also stressed that, despite some important steps, regional cooperation in the area of war crimes prosecution is still burdened by a number of problems, including parallel prosecutions and a too limited exchange of information between the prosecution offices, and offers only a few examples of good practice, such as setting up joint investigation teams.

The Deputy Head of Mission at the Swiss Embassy pointed to the need to adopt a regional strategic framework which would provide foreseeability and efficiency in the prosecution of war crimes in the region, and which, together with a framework for efficient protection of victims and witnesses, would be of key importance for dealing with the past in the successor counties of the former Yugoslavia.

Ms. Milica Kostić, HLC Legal Director, presented the findings in the area of the prosecution of war crimes and the provision of material reparation to victims. As she stated, a decrease in the activities undertaken by the Office of the War Crimes Prosecutor (OWCP) was observed in Serbia in the period 2013-2015, and one may see this in the fact that during those recent three years the OWCP indicted half as many persons as in the previous triennium. There are still no indictments against high-ranking members of the civilian and security forces. The situation is similar as regards regional cooperation in the prosecution of war crimes. For instance, on the basis of regional cooperation with BiH, the OWCP opened nine cases during the reporting period, but they all concern low-level perpetrators and cover only a small number of accused. Some positive steps have also been noted, however, such as the joint investigation by the OWCP and the BiH Prosecution Office in the Štrpci and Srebrenica cases, which represent more complex cases with a greater number of victims. Ms. Kostić also pointed out that trials before local courts last too long: as a rule, it takes more than five years to complete more complex cases; and cases before courts of general jurisdiction take more than 12 years to complete. The reason for this slow pace lies in the frequent retrials and dismissal of judges in special departments, which results in long-lasting trials and the withdrawal of injured parties and victims’ families from trials.

Ms. Kostić also concluded that war crimes trials are not visible enough to the public, and that there are a great number of citizens who know nothing about the court-established facts concerning perpetrators and victims. The courts bear a part of the responsibility for this situation, since they obstruct access to trials and judicial documents.

As for the right of victims to material reparation, the victims face a series of institutional and legal obstacles. The number of cases in which victims were granted compensation of damages was very small, and the compensation amounts granted in these cases were humiliatingly low. A great number of victims do not manage to realize their rights on the basis of the Law on Civilian Invalids of War, since this Law does not grant them the status which would secure them certain material, medical and social forms of protection. Ms. Kostić stated that this Law is probably the most discriminatory law being applied today in Serbia, since it excludes a number of victims’ categories, and pointed to the fact that, whilst other countries in the region note positive trends in this respect, Serbia’s new draft law in this area goes backwards.

The author of the Report Ms. Jelena Krstić, presented the findings which relate to official efforts to establish the facts about the past, the memory of victims’ suffering, and the setting-up of conditions for the prevention of recurrence of past crimes. In her opinion, a dichotomy in the approach to victims is at present apparent in Serbia: whilst the suffering of Serbian victims is being remembered by the institutions, the suffering of other peoples is being denied, relativized or ignored. For instance, while officially marking the anniversary of Operation Storm (“Oluja”), the institutions have ignored the recommendation by the European Parliament to mark July 11th as Srebrenica Genocide Memory Day, and the government has forbidden citizens of Serbia who wish to pay their respect to the victims to gather for this purpose.

It is mainly non-governmental organizations that concern themselves with establishing facts about the past in Serbia, and they have initiated the process of setting up a regional commission for establishing facts about war crimes. They are also compiling a register of human losses during the armed conflicts. On the other hand, institutional efforts aimed at the resolution of the fate of the missing are obstructed by a conspiracy of silence and the attempt to protect the commanders and perpetrators of the crimes. The discovery of the Rudnica mass grave near Raška provides a good example of this. This mass grave was found only after institutions from Kosovo provided information of its existence, even though it is located on the territory of Serbia, and despite the fact that Serbian forces created it.

Least has been done in the area of institutional reform in Serbia, which is why the position of the Chief of General Staff of the Serbian Army today is occupied by a person for whom there is credible evidence pointing to his involvement in crimes committed in Kosovo and in the concealment of the bodies of Kosovo Albanians in mass grave sites in Serbia. However, the most alarming finding in this Report, in Ms. Krstić’s opinion, is that education programmes in Serbia do not represent an obstacle, but rather an encouragement, for future conflicts. Their content contrasts with the court-established facts about the crimes committed, and provides scant and selective information about the events which happened during the armed conflicts, with biased presentations of the sufferings of the Serbian people in relation to other peoples.

Mr. Dragan Pjevač, the President of the Coordination of the Serbian Associations of Families of Missing Persons from the territory of the Former Yugoslavia, expressed his conviction that there is a need for a public debate about Srebrenica, which would prevent its political manipulation. He also believes that all official initiatives fostering the memory of victims are welcome, including the initiative by the Serbian Prime Minister Aleksandar Vučić to set up a Memorial Day for all victims of the conflicts in the former Yugoslavia. He called on the successor countries of the former Yugoslavia to engage in a joint endeavour to set up a museum in which each of these countries would have its own ‘room of shame’.