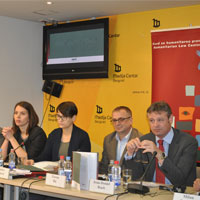 On Thursday, March 3, 2016, the Humanitarian Law Center (HLC) presented the Report on War Crimes Trials in Serbia in 2014 and 2015, and organised a debate on this occasion. The Report includes an analysis of 27 cases that were conducted before the courts in Serbia, the general findings about the war crimes trials, and an overview of the sociopolitical events that were of importance to the war crimes trials in Serbia in the said period.

The debate was opened by Jean-Daniel Ruch, the Ambassador of Switzerland to the Republic of Serbia. He welcomed the adoption of the National Strategy for the Prosecution of War Crimes, and commended the good results in regional cooperation between prosecutors’ offices. However, he also pointed out that key issues in the prosecution of war crimes remain the concealment of information about the crimes committed and the small number of prosecuted perpetrators. Ambassador Ruch recommended the following course of action: prioritization of cases, prosecution of high-ranking perpetrators, fair provision of reparations to all victims, and coordinated action by the countries of the former Yugoslavia in the direction of reconciliation and dealing with the past.

HLC Executive Director Sandra Orlović emphasized that in 2014 and 2015 the trend of a low number of indictments continued, with the increased frequency of insufficiently prepared indictments and annulled first instance judgments, and the absence of judicial cases against high-ranking perpetrators. Ms. Orlović assessed the process of the election of the new War Crimes Prosecutor as non-transparent, with unclear selection criteria and a subjection to political influence. She commented on the National Strategy for the Prosecution of War Crimes, which contains good solutions for increasing the efficiency of war crimes prosecutions, on condition that the institutions implement the Strategy in good faith. The drawbacks of the Strategy are reflected in the conditional nature of the implementation of government austerity measures, and the absence of measures for improving human resources, which are the key to improving the efficiency of the prosecution, as well as the absence of clear indicators of success in the implementation of the Strategy.

Marina Kljaić, the legal representative of victims in cases of war crimes, described the long duration of court proceedings, frequent changes in the composition of trial chambers and the anonymization of judgments as being the issues that hampered the efficient prosecution of war crimes in Serbia in 2014 and 2015. Postponement of procedures has caused insufficiently prepared indictments, a poor quality of first instance and appeal judgments, and frequent changes of acting judges, which has been the reason for starting over again with the hearings of cases. The length of proceedings was especially characteristic of the trials conducted before the courts of general jurisdiction, where certain cases were being processed for over ten years. Ms. Kljaić emphasized that the anonymization of judgments in war crimes cases is still present, even though the Commissioner for Information of Public Importance ruled that it was unlawful back in March 2014.

Acting War Crimes Prosecutor Milan Petrović agreed that the OWCP does not act efficiently enough, and he pointed out that the main reason for that inefficiency has been the small number of deputy prosecutors and their assistants, and the unavailability of evidence. He also stated that regional cooperation and cooperation with the ICTY has been very important, but that there is room for improvement. Together with the prosecution of high-ranking perpetrators, the issues mentioned here will be the priorities in the work of the OWCP in the forthcoming period. With respect to trials before the courts of general jurisdiction, Petrović notified the audience that he had personally inspected 1000 cases, and that it has been established that around 400 cases can be taken over by the OWCP.

The President of the Association of Public Prosecutors and Deputy Public Prosecutors of Serbia Goran Ilić said that the recent election of the War Crimes Prosecutor was subject to political influences, that the criteria for selection were too general and fluid, and that the process of selection itself was biased, which was contrary to international standards that prescribe the criterion of objectivity when it comes to the selection of candidates, and impartial and fair election procedures. In his opinion, the Government’s criteria when proposing candidates to the National Assembly were unclear, and the issue of whether the Government is even competent to evaluate the worthiness and expertise of future prosecutors is open to discussion. Therefore, Mr. Ilić recommended amendments to the Law on the State Prosecutorial Council, which would be the only competent body for the election of new public prosecutors.

Omer Hadžiomerović, a judge at the Court of Appeals in Belgrade, stressed that the key criterion for evaluating judicial proceedings is their fairness, and only then their efficiency. In this context, he feels that the number of indictments for war crimes corresponded with the capacity of the OWCP. He also thought that we have to bear in mind the capacity of the courts,the unavailability of evidence and the inadequate cooperation shown by the ICTY, who have not submitted the documents that the courts in Serbia require.

Bruno Vekarić, Deputy War Crimes Prosecutor, pointed to the difference between the National Strategy for the Prosecution of War Crimes as a political document and the Prosecutorial Strategy as the OWCP’s operational document. Mr. Vekarić believed that regional cooperation is successful, but agreed that it is necessary to improve the efficiency of the work of the OWCP.

Speaking of aggravating circumstances in the prosecution of war crimes, a former military prosecutor Mr. Lakić Đorović pointed out that the people who had started the criminal enterprises are the same people who are now at the top levels of leadership. He also said that the persons who committed the most serious crimes are at the head of the General Staff, and that the crimes were covered up even by the generals, who until 2008 had been the deputies of the Republic’s Public Prosecutor.

Posted On 22nd November 2014 ~ Comments Off on Towards Strategy for the Prosecution of War Crimes in Serbia – Session on Presentation of War Crimes Trials in Public
U petak 21. novembra 2014. godine, u Medija centru u Beogradu održana je peta konsultativna sesija povodom izrade Predloga Strategije procesuiranja ratnih zločina u Srbiji.