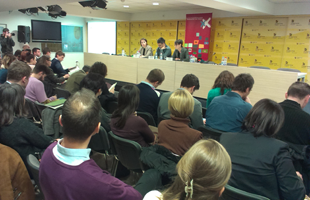 On January 29, 2015 the Humanitarian Law Center (HLC) presented the “Rudnica” Dossier. The Dossier offers an insight into the evidence on four crimes committed in April and May 1999 in Kosovo by members of the Yugoslav Army (VJ) and the Ministry of the Interior (MUP), the victims of which were Kosovo Albanian civilians whose bodies were exhumed from the mass grave in Rudnica, as well as to present the evidence which points to those who participated in the operations of transporting and concealing the bodies at secret locations for 15 years.

The main findings from the Dossier were presented by the HLC Executive Director, Sandra Orlović. The bodies of 52 victims, from 14 to 87 years of age, have been identified in Rudnica to date. All victims were civilians – Albanians from Kosovo, who were killed in four separate crimes committed in villages in the area of Drenica. During the armed conflict in Kosovo, the Drenica sector was in the area of responsibility of the 37th Motorized Brigade of the Yugoslav Army (37thMtBr), which was at that time under the command of the present Chief of General Staff of the Serbian Army, Ljubiša Diković. Military documents published in the Dossier point to the presence of the 37thMtBr in three villages in which the above-mentioned crimes were committed. In the case of at least one of these crimes – the crime in the village of Rezala, it is certain that members of the 37thMtBr were the persons who committed the crime. The HLC has also found that the „clearing-up of the battlefield“ in the villages in which the crimes were committed was under the jurisdiction of the 37thMtBr. But the HLC’s researchers’ most significant findings were with regard to the attempted handover of the victims’ bodies in the village of Rezala. Namely, ten days after the crime, the Clearing-up Squad of the 37thMtBr demanded that the civilian authorities take over the bodies of the killed, which they refused to do. Ms. Orlović stated particularly interesting information relating to the location of the mass grave in question – it was in a public place, next to the main road, and beside a land lot owned by the Serbian Army.

Speaking of the reasons for researching the circumstances regarding the mass grave in Rudnica, Ms. Orlović emphasized the indifference that the institutions of Serbia have shown as regards undertaking an investigation in order to establish responsibility for the killings, for the relocation and concealment of the bodies of the victims and the apparent blocking of the process of the search for the missing persons. She underlined that a government which is dedicated to the rule of law not only should establish the identity of the persons concealed in the mass grave in Rudnica, but should also prosecute the individuals responsible for the killings, relocation and concealment of the bodies, and help find the remaining secret locations at which the bodies of victims’ have been hidden. The key to finding the concealed locations is to open the army and police archives. But first of all, an adequate message needs to be sent from the highest political levels that the hiding of the bodies of missing persons does not represent an act of patriotism, but a continuing offence, and causes even more pain to victims’ family members.

The HLC’s Legal Director, Milica Kostić, spoke about the crimes committed in the villages of Rezala, Staro Čikatovo, Donji Zabelj and Gladno Selo, in which persons whose bodies were found in the mass grave at Rudnica were killed. At least 73 Albanian civilians were killed in these crimes. The worst mass killings were committed in the villages of Rezala (Srbica) and Staro Čikatovo (Glogovac) on April 5th and 17th, 1999. Military documents indicate that the 37thMtBr carried out operations in these villages, which is confirmed by the orders issued by the then Commander of this Brigade, Ljubiša Diković.

A journalist from the SENSE Agency, Nemanja Stjepanović, spoke about the facts established in the ICTY judgments in the cases of the Kosovo Six and Vlastimir Đorđević with regard to the killings, relocation and concealment of the bodies of Albanians from Kosovo. The responsibility of the highest ranking Serbian officials was established in these judgements, as well as the existence of a joint criminal enterprise aimed at the changing of the ethnic balance in Kosovo; and the relocation of victims’ bodies to secret locations in Serbia was established as one of the main indicators of this enterprise. The evidence presented before the ICTY showed that the police played the greatest part in the crimes committed against Albanian civilians in Kosovo, while the Army had an important role in the clearing-up of the terrain and the removal of dead bodies, which were later found in mass graves in Serbia. Mr. Stjepanović pointed to the fact that these ICTY judgments arrived at two important conclusions: first, that the crimes in Kosovo were planned at the very highest levels of the Serbian state, with the participation of the highest ranking military, police, and civilian officials; and second, that the operation for the removal, relocation and concealment of victims’ bodies demanded comprehensive logistics and the participation of a great number of people, because of which there are a great number of witnesses. Pointing to these findings, Mr. Stjepanović called upon the Republic of Serbia Office of the War Crimes Prosecutor to bear these findings in mind when rendering the decision on launching an investigation into the crimes committed by members of the Serbian Army and Police in Kosovo.

Jasna Šarčević Janković, from the Office of the War Crimes Prosecutor, stated that according to the latest information, 53 victims have been identified in Rudnica, and that the preliminary investigation in the case of this mass grave is underway, during which dozens of witnesses have been examined.

The ”Rudnica” Dossier is the fifth dossier in a row published by the HLC, and its aim is to present the evidence on crimes committed by members of the Serbian forces during the armed conflicts in the former Yugoslavia to the general public – crimes for which they have not yet been prosecuted before the ICTY and local courts.

The Document was produced on the basis of authentic military and police documents, statements given by the victims who survived the crimes, victims’ family members, forensic reports, testimonies of VJ officers and MUP officials given before the International Criminal Tribunal for the Former Yugoslavia, and other relevant material.