Report from Visit to Memorial Sites in Jasenovac, Prijedor and Vukovar 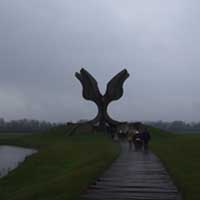 As part of the programme of the Regional School for Transitional Justice, the students of the School visited several places in Croatia and Bosnia and Herzegovina where crimes were committed. The main purpose of these visits was to introduce the students to the memorialization processes in the former Yugoslavia and direct communication with survivors of these crimes.

During the two-day visit, the students visited the Jasenovac Memorial Center, where they had an opportunity to learn more about the persecution of Serbs, Jews, Roma and other non-Croats and Croat antifascists by the Ustasha regime. In the conversation with the Curator of the Museum, Maja Kučan, the students learned more about the Ustasha regime’s laws of intolerance towards unwanted ethnic, racial and political groups, the operational aspects and time period during which the Jasenovac concentration camps existed (1941-1945.), the work on the compilation of the list of individuals who have been identified so far (over 85,000) and all the horrors that the detainees in the camps experienced.

After this, a visit to Prijedor was organized, where students met Sudba Musić, a detainee in the Trnopolje camp and the current Secretary of the “Prijedor 92” Association of Detainees. In the conversation with Sudba, the students had an opportunity to hear the dreadful story first-hand from one of the victims; but during this conversation, they also learned more about the general picture of the horror and ethnic cleansing suffered by non-Serb citizens of Prijedor during the war in Bosnia and Herzegovina.

The students also visited the site where the Trnopolje camp was located, where Sudba Musić informed them about the operation of this camp and the Keraterm and Omarska camps. After the visit to Prijedor, a visit to Vukovar was organized, where students met Mirko Kovačić, a survivor of the Vukovar tragedy, who informed them about the horrors that he and his family and other citizens of Vukovar experienced during the siege at the hands of the Yugoslav Peoples’ Army and Serb paramilitary formations, and about the crime committed at Ovčara.

According to one of the Regional School students, Višnja Šijačić from Novi Sad, the conversations with surviving victims and the visits to the memorial sites, Vukovar in particular, represented an invaluable experience, because it offered an opportunity for some sort of a local dealing with the past, since she was a witness of tanks being sent to Vukovar from Novi Sad in 1991. For Donika Prekaj from Peć/Peja , the talk with the survivors and the use of oral narratives about the crimes in Jasenovac, represented the best way to learn about the crimes, because it is impossible to get the real picture of what happened in the past without victims’ testimonies. Eldina Bešović from Sarajevo holds that the non-marking of sites where people were killed represents a clear denial of crimes committed, but victims who have enough strength to speak out loud and clear about what happened to them during the war give hope for the reconciliation process in the region.