“Who Can Erase the Traces?” The Role of Archives in the Promotion of Human Rights

A panel discussion on the role of archives in the protection and promotion of human rights was organized as part of the Central European University Summer course on the ‘Policy and Practice in Access to Digital Archives’ held in the period July 2nd-6th, 2012 in Budapest. Archivist Stana Tadić represented the Humanitarian Law Center at this gathering.  Other participants in the panel discussion were Gabrijela Gavran, the Manager of the War Crimes Database at the University of Zagreb’s Faculty of Law, Gabriella Ivacs, Chief Archivist of the Open Society’s Archive in Budapest, Nikola Mokrović, an archivist from Documenta,Zagreb, and Alice Nemcova, an OSCE researcher-coordinator.

The participants discussed manners and methodologies for administrating such archives in Eastern and Central Europe, the role of documents and collections of documents created during the times of oppressive regimes, and the role they have in post-conflict societies. One of the topics of the discussion was also the use of archival material in the process of establishing criminal responsibility, its role in the reparation of victims and their families, as well as the use of these documents during later research and recontextualization of the documents.

Stana Tadić mentioned the Kosovo Memory Book,  the Humanitarian Law Center is working on, as an example of the use of primary documents for the purpose of dealing with the past together with documents originally created for other purposes and which originate from other sources.  This book represents an example of how short narratives on victims of the conflict in Kosovo have been written on the basis of sfacts originating from various, primary and secondary, documents, managed to be obtained by the Humanitarian Law Center during the years of its research. 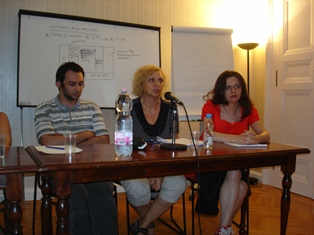