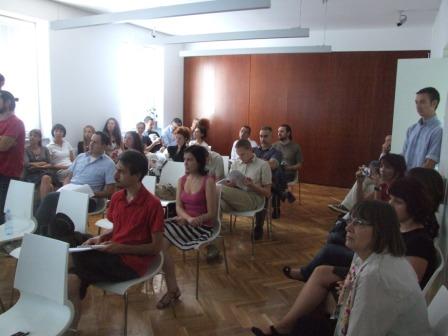 Belgrade, September 14, 2011 – Nataša Kandić, Director of the Humanitarian Law Center (HLC) stated today that there is still no official action of the authorities in charge following the criminal complaint filed by the HLC against commanders and members of the Tenth Sabotage Detachment of the Army of Republika Srpska (the Detachment) for the crime of genocide they committed in Srebrenica in spite of all available evidence.

Jelena Plamenanc, the author of the Dossier of the Tenth Sabotage Detachment of the Army of Republika Srpska presented the structure, the facts, and the evidence contained in it. The Dossier features basic information on the Detachment, its documented operations, as well as the names of superior commanders and their subordinates. When asked if those members of the Detachment identified in the Dossier held public offices today, Plamenac answered she was not aware of that but she knew for a fact that the brother of Milorad Pelemiš, who was not a member of the Detachment, is an employee of the War Crimes Investigation Unit of the Ministry of the Interior of the Republic of Serbia.

The operations and crimes described in the Dossier refer to mass executions of Bosniaks from Srebrenica. According to the information Nataša Kandić shared with the press, members of the Detachment took part in mass executions of Bosnian Muslims in two different locations: at the Branjevo Military Farm in the village of Pilice on July 16, 1995 on which occasion approximately 1,200 Bosniaks were executed and in the Bišina village on July 23, 1995 when at least 39 prisoners were executed.

The criminal complaint filed by the HLC to the Office of the War Crimes Prosecutor of the Republic of Serbia, in addition to Milorad Pelemiš and Petar Salapura, former Chief-of-Staff of the Administration of the Intelligence Service of the Main Staff of the Army of Republika Srpska, includes the following members of the Detachment: Radoslav Kremenović, Franc Kos, Dragomir Pećanac, Brano Gojković, Vlastimir Golijan, Aleksandar Cvetković, Stanko Savanović, Zoran Obrenović, Zoran Goronja.

The Dossier can be downloaded in pdf format here.