Art students, political science students, and students of history of Eastern and South-Eastern Europe of the Ludvig Maximus University from Munich and their professors visited the Humanitarian Law Centre on June 18, 2010. 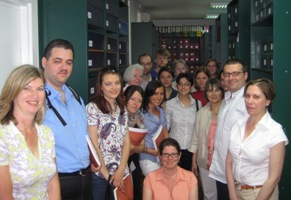 Nataša Kandić, Executive Director of the Humanitarian Law Center (HLC) briefed the students about HLC’s activities from the time it was founded till present time. Students and their professors were interested in learning whether the video of the execution of six Muslim men from Srebrenica had any influence on the public in Serbia to adopt a different view on the crimes and victims from Srebrenica.

They also wanted to know what the HLC thought about the Resolution on the Srebrenica Massacre adopted by Serbia’s National Parliament.
Nataša Kandić took time to inform them about the activities of the Coalition for RECOM and the Initiative for the creation of a regional commission for establishing the facts about all crimes on the territory of the former Yugoslavia in the period from 1991-2001. At the end of their visit, German students viewed the HLC Archives.