BELGRADE, 18 June 2009 — The War Crimes Chamber of the Belgrade District Court, presided by Judge Snežana Nikolić-Garotić, found four members of the Scorpions, a reserve unit of the Serbian Ministry of Interior, guilty of committing a war crime against Albanian civilians on March 28th 1999 in Podujevo, Kosovo, and sentenced Željko Đukić, Dragan Medić and Dragan Borojević to 20 and Miodrag Šolaja to 15 years’ imprisonment.

The War Crimes Chamber established that the defendants, armed with automatic rifles, had opened fire, letting off several tens of rounds of ammunition, on a group of 19 Albanian civilians, women and children, with the intention of killing them in the courtyard of the Gashi family house on March 28th 1999. A total of 14 women and children were killed that day; seven were children. The oldest victim was 69, the youngest two.

“This trial brought some justice to the victims, and the court was guided in its work by the facts – at least in relation to the direct perpetrators of the crime. This trial showed that it was not a problem to try and sentence those proven to have directly committed the crimes. But in future it will be important to establish the facts about not only the direct perpetrators, but their commanding officers who did not prevent the crime but even gave their subordinates permission to do it”, said the executive director of the Humanitarian Law Centre, Nataša Kandić, after the judgement and sentencing. 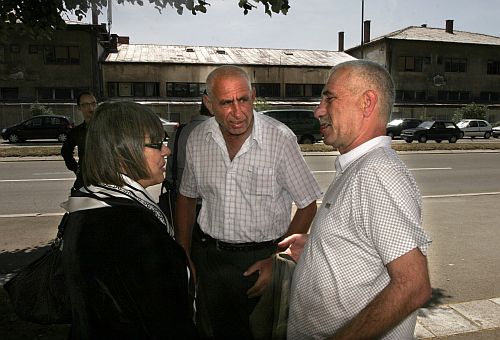 Nataša Kandić with the victims’ family members, Selatin Bogujevci and Enver Duriqi, in front of the Court (Photo by Dejan Kostić)

The four accused members of the “Scorpions” were arrested on October 19th 2007 in Sremska Mitrovica. The trial started in September 2008. There were a total of 29 days of trial in which 27 witnesses, two expert witnesses and seven victim-witnesses gave testimony.

A judgement has already been brought down for this crime in Podujevo; Saša Cvjetan, also a member of the Scorpions, was sentenced in 2005 to the maximum sentence of 20 years’ imprisonment.

Criminal complaint against persons suspected to have committed a criminal act of genocide in Srebrenica, BiH

Posted On 3rd August 2016 ~ Comments Off on On the occasion of 21 years since Operation “Storm”: Serbia to demonstrate care for victims through actions
Dana 4. i 5. avgusta obeležiće se 21. godišnjica operacije „Oluja”, koja će i ove godine i u Hrvatskoj i u Srbiji imati karakter državne