END_OF_DOCUMENT_TOKEN_TO_BE_REPLACED

One year after it rejected the application of former detainees from the Šljivovica and Mitrovo Polje camps, the European Court of Human Rights issued a decision on October 19 2017 declaring the second application, submitted on behalf of family members of the killed camp detainees, inadmissible. The Humanitarian Law Center (HLC), which represented the victims’ families in these proceedings, points out that the European Court re-used the same, factually unsustainable structure of reasoning in order to transfer the responsibility for the inactivity of war crimes prosecutions from the state to the victims themselves. END_OF_DOCUMENT_TOKEN_TO_BE_REPLACED

The main trial before the War Crimes Department of the High Court in Belgrade in the Trnje case, which was scheduled for September 13 2017, was not held because the defendant Pavle Gavrilović did not appear before the Court, again, because he allegedly fell ill on the day of the trial. His absence was, as in previous occurrences, justified on the basis of medical records issued by the Military Hospital in Niš. The second defendant, Rajko Kozlina, used to use a similar tactics of absence from the trial, with the only difference that he received confirmation of hospitalization from the Belgrade Military Medical Academy. Both defendants are still members of the Army of the Republic of Serbia. The Humanitarian Law Center (HLC) points out that this is a deliberate obstruction by the defense, with the complicity of military medical institutions, and calls on the court to, by at least placing the defendants in custody, put an end to an obvious obstruction of justice. END_OF_DOCUMENT_TOKEN_TO_BE_REPLACED

More than a year after the adoption of the  Action Plan for Chapter 23 (Action Plan), the provisions of this document relating to the prosecution of war crimes are being carried out superficially, for merely ”cosmetic” purposes, and many of the prescribed activities are not being carried out at all. The situation is the same when it comes to the implementation of the National Strategy for the Prosecution of War Crimes (National Strategy). It must therefore be said that the state authorities responsible for the implementation of the above provisions of the Action Plan and  National Strategy are falsely informing the public about their work, and continually making it difficult for the civil society to access relevant information and monitor their work. The Humanitarian Law Center (HLC) believes that such behaviour is contrary to the obligations of the accession negotiations with the EU, and is an indicator of Serbia’s lack of commitment to the reform process, as well as sincere effort to prosecute war crimes more efficiently. END_OF_DOCUMENT_TOKEN_TO_BE_REPLACED

The Court of Appeals in Belgrade has dismissed (available in Serbian) the indictment filed against eight members of a Special Brigade of the Republic of Srpska Ministry of the Interior, accused of killing 1,313 civilians from Srebrenica in the Kravice hangar on July 14th, 1995 (Srebrenica – Kravica Case), with the explanation that the indictment was not filed by an authorized prosecutor. The Humanitarian Law Center thinks such a decision represents an inadmissible failure of the local judiciary, which will further jeopardize the process of war crimes trials, already deemed to be too slow. END_OF_DOCUMENT_TOKEN_TO_BE_REPLACED

The persons charged are suspected of the expulsion of several hundred Bosniaks from the village of Bukovačke Čivčije (Municipality of Doboj) in the period from May to August 1992, killing one member of the Croatian National Guard, robbing civilians, and abusing and torturing prisoners in the Doboj district prison. END_OF_DOCUMENT_TOKEN_TO_BE_REPLACED

The Chief Prosecutor of the International Criminal Tribunal for the former Yugoslavia (ICTY), Serge Brammertz, in his regular six-month address to the UN Security Council on 7 June 2017, presented a report in which he warned of a growing trend of denial and revisionism of court- established facts in Serbia and  the entire region, as well as of the burning issue of the slowdown in the process of war crimes trials before Serbian courts, and the difficulties of regional cooperation between specialized prosecution offices. At the same session of the UN Security Council, the Serbian representative Čedomir Backović rejected any words of criticism and opposed Brammertz’s substantive objections by presenting the supposed statistical successes of the Serbian government that he represents. The signatories to this appeal demand that the Serbian authorities consider carefully the objections addressed to Serbia during the UN Security Council session, and deal with problems that have in recent years resulted in the growth of nationalism in society and a drastic deterioration in relations with the countries of the region.

END_OF_DOCUMENT_TOKEN_TO_BE_REPLACED

On the occasion of the election of the Prosecutor for War Crimes of the Republic of Serbia: No discussion on the future of war crimes prosecution

On Monday, May 15th 2017, the National Assembly of the Republic of Serbia elected Snežana Stanojković, former Deputy Prosecutor, as the new Chief Prosecutor for War Crimes in Serbia. This position has been vacant since January 1st 2016. Human rights organizations are welcoming the election of a new Head of the Office of the War Crimes Prosecutor (OWCP), primarily because of the importance of continuity in the domestic prosecution of war crimes, which was threatened with disruption because the appointment of a new chief prosecutor had been delayed for almost a year and a half; and also because this occasion should indicate the final start of the implementation of measures designed to increase the efficiency of this office. END_OF_DOCUMENT_TOKEN_TO_BE_REPLACED

The initiative for assessing the constitutionality of the Law on the Rights of Civilian Invalids of War dismissed: The Constitutional Court does not recognize discrimination against civilian victims of war 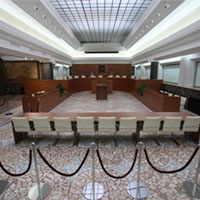 The Serbian Constitutional Court has adopted a conclusion dismissing the initiative for assessing the constitutionality of the Law on the Rights of Civilian Invalids of War that the Humanitarian Law Center (HLC) filed in May 2016. The HLC states that the formalistic argument rendered by the Constitutional Court was not a thorough constitutional assessment of this disputed Law, but a decision reduced to an insufficiently reasoned reproduction of the provisions of the Law, which placed the highest judicial institution in the country on the same side as the other government bodies that maintain this discriminatory legislation, which disenfranchises most of the civilian victims of war in Serbia. END_OF_DOCUMENT_TOKEN_TO_BE_REPLACED

On the occasion of the presentation of the Report on the Implementation of the International Covenant on Civil and Political Rights: Manipulating data on the effectiveness of the prosecution of war crimes in Serbia

In March 7th and 8th, 2017, the Serbian delegation presented the Third Periodic Report on the Implementation of the International Covenant on Civil and Political Rights before the UN Committee for Human Rights in Geneva. The report contains data on the prosecution of war crimes in Serbia. During the discussion with the Committee experts, the delegation offered a distinctly tendentious presentation of the information about the work of state authorities responsible for the prosecution of war crimes, or presented completely false information, all with the aim of creating an illusory image of high efficiency. The Humanitarian Law Center (HLC) believes that such actions on the part of the delegation illustrate the relationship that the Republic of Serbia has towards its international obligations in the field of human rights, including those obligations derived from the accession negotiations with the European Union. Serbia tends to meet only the minimum formal requirements of international bodies, and creates an illusion of efficiency without the ambition to substantially fulfill its obligations.